Daniel was a Disabled American Veteran who served in the Middle East. With assistance  from the Veterans Administration, Farm Service Agency and Farmers Veterans Coalition he was able to begin his farming operation. Through the networking from FARM BEGINNINGS® , presenters Ruth Chantry & Evrett Lundquist from Common Good Farm connected Daniel with landowners in York where he leased 3 acres for his farm. “Common Good Farm” also provided Daniel with some valuable advice as he started and developed his new laying flock of Rhode Island Reds. He was able to purchase these portable buildings from Mid-American Structures at Peru, NE. With these portable structures, he was able to move them to his farm when he purchased it.

Daniel had about 400-500 hens in his flock on his farm near York.  Starting out  in York he marketed eggs to Grand Central Foods in York, NE. He also sold eggs to the Chances “R” Restaurant in York and sold at the Old Cheney Farmers Market in Lincoln and on the Nebraska Food Coop, an on-line local food coop.

Daniel  moved his portable buildings from his farm in York. He now has permanent fencing, a tractor to help with the chores and feed storage as shown in the photo above. Daniel has expanded his flock to 500-600 hens.  Besides the Rhode Island Reds he started with, he now has some other breeds that do well in his operation.  From the photo above you see he has several of the Gold Sex Link Hens. These are very gentile and excellent egg producers, laying on average over 300 eggs/per hd/per year.  These are brown egg layers.  He also has some Black Australorps and Barred Rocks in his flock.

Daniel also has expanded his operation into broiler production.  He raises from 100-150 broilers annually and sells these direct to consumers as well.  Most of these are sold at the Old Cheney Farmers Market in Lincoln where he goes 2 times a month when they are open from spring through fall (April – October).

Daniel continues to deliver eggs to Grand Central Foods in York, but now also sells eggs to four Hy-Vee locations, one in Kearney, Grand Island, Williamsburg Hy-Vee in Lincoln and the 5010 O St. location in Lincoln.  He also sells to two restaurants in the Lincoln area that source almost all of their food locally, “The Hub” at 250 N 21 St. in Lincoln and Prairie Plate Restaurant at 10405 Branched Oak Rd. near Waverly, NE.  Daniel continues to sell at the Old Cheney Farmers Market, on the Nebraska Food Coop on-line market, direct from his farm near Grand Island and to other customers in the Lincoln area. 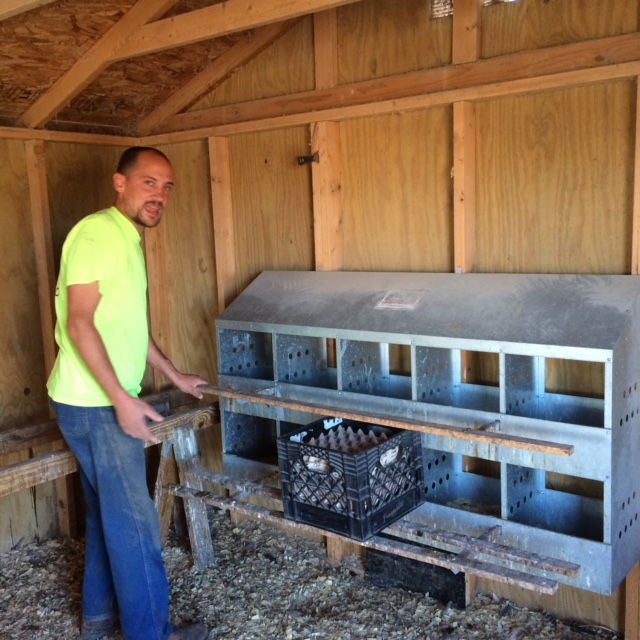 With a flock between 500-600 hens and very productive egg layers, it takes a lot of time to collect all these eggs every day. I caught Dan collecting eggs when I visited his farm near Grand Island last year.

Besides Daniel’s extremely hard work on his farm, he has been a spokesperson for the Farmers Veterans Coalition and all Veterans. He was named a Champion of Change by the Nebraska Vocational Rehabilitation Services.  He went to Washington D.C. to receive this award. He has also had Congressman Adrian Smith visit his farm near Grand Island.  He has been to Washington D.C. talking to representatives about Veteran’s and local food issues. If you want to find out more about Daniel Hromas and Prairie Pride Poultry, go to https://localhens.com/farms/profile/prairie-pride-poultry/ or on Facebook at:   https://www.facebook.com/prairieprideacres/.